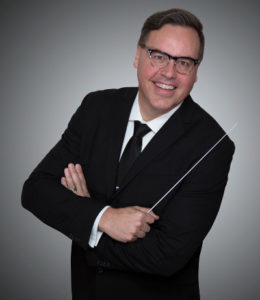 Internationally known artist Kirt Mosier brings the unique perspective of being both a conductor and a composer.   Mosier’s engaging personality and sense of humor spread joy to orchestras and audiences worldwide.

Mosier has twice won national composition awards with his 1993 work entitled “Baltic Dance”  and his 2004 composition entitled “American Reel”.  In 2010 Mr. Mosier was commissioned by the Portland Ballet Company of Portland, Maine to write an original score for their production of “The Legend Of Sleepy Hollow”.  He has had many works featured at the Midwest International Clinic in Chicago and conducts there regularly.

Kirt Mosier was recently awarded the Joanna Nichols Artist In Residence Grant by the Taipei American School and will be the Artist In Residence in Taipei beginning in 2020.  He will live in Taiwan for the month of April each year. Currently, Mosier is the artistic director for the Youth Symphony of Kansas City and is also the associate conductor of the Lee’s Summit Symphony.  He was an adjunct professor for the University of Missouri Kansas City Conservatory where he taught orchestration and he also had a distinguished career as Director of Orchestras with the Raytown and Lee’s Summit School Districts in Missouri.

Mr. Mosier is also sought after as a keynote and motivational speaker by school districts and various organizations throughout the United States.